The great thing about having high expectations is when the actual event even surpasses them. This was the case with my first-time experience at the FJMC International Convention in Toronto. I must say that I initially was somewhat apprehensive when I sat down on the Porter Airlines plane at Midway Airport in Chicago and saw it was a propeller plane. But the entire flight was flawless, and the 10-minute trip from the Billy Bishop Airport to the Westin Harbour Castle Hotel in downtown Toronto could not have been more convenient. 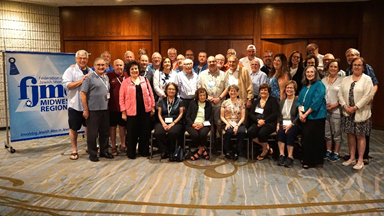 After a slight mixup in the room reservation that was promptly corrected by Norm Katz, I thought to myself that if everyone attending FJMC is as nice as him, then this will truly be an outstanding event. As it turned out, everyone pretty much was as nice and accommodating as Norm. I immediately set out to meet as many FJMC members as I could. This turned out to be a lot of great guys. I have so many friends as President of our Anshe Emet Men’s Club in Chicago, but the convention gave me the opportunity to actually meet for the first time many people that I have been emailing and conversing with by phone from my own Midwest Region for the last 3 years. Moreover, I met and shared laughs, ideas, and concerns with members from as far west as California, as far east as Philadelphia, as far north as Montreal, and so many places in between. If you study the group photo, I am the fellow in the 2nd row, 5th person from the right—standing in front of my friend, Jon Norton, who asked me several years ago if I would like to come to one of our Men’s Club Board meetings. I have been attending them ever since.

The quality of the speakers was exceptional. From the insights of Rabbi Daniel Cohen, to the Jewish compassion of Rabbi Mark Borovits, to the political anecdotes of Paul Gottfried, there was much to learn and to think about. The Cantors Concert, the innovative styles of Jewish spiritual services, and the local Toronto comedians provided much food for the soul. The member-led programs filled with ruach also were excellent and of professional quality. We all were moved to tears to hear Irwin Harris’s first-hand account of the tragic events that occurred at the Tree of Life Synagogue in Pittsburgh and valorous attempts to rebuild. My first exposure to the “Hearing Men’s Voices” discussions were so worthwhile. I found the programming so captivating that I had no desire to leave the hotel during the entire convention. 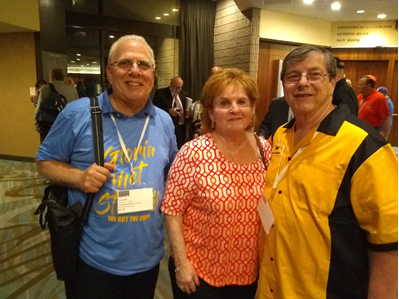 Speaking of much food for the soul, there also was an over-the-top amount of delicious kosher food for the body throughout each convention day. In case the ample 3 meals were not enough each day, there also was a mid-afternoon “snack” and a late-evening “reception.” Many kudos to our convention committee for all of their efforts to make my first experience and that of all of the attendees such a memorable one. I have a wealth of material and observations to share with my Men’s Club and about 10 extra pounds to shed. Make sure you attend our next International Convention. I will be looking for you.

Barry is currently President of the Anshe Emet Men’s Club in Chicago.  He retired in 2016 as an Information Technology Service Coordinator for over 30 years for the City of Chicago. Barry currently does IT consulting, teaches computer classes for the Jewish Vocational Service, and studies piano. In addition to his congregational life, he greatly enjoys spending time with his wife of 46 years, Marlene, and his 2 sons and daughters-in-law, Reuben and Sammi and Paul and Becca.