For those who are new to the other parts of our movement, MERCAZ is the Zionist arm of the Conservative/Masorti Movement. To complicate things, you may have also heard of Masorti and Masorti-Olami, which are the “political” arms for Israeli policy and promotion of our values in Israel and around the world.

As I wrote in another article, the World Zionist Organization holds a World Congress every five years, where each country sends representatives to the Congress, based on several arcane formulae to determine the number of mandates (delegates) to the Congress from that country. In some countries, the overall Zionist organization will negotiate the split, while in others, elections are held among all of the constituent national groups to determine the numbers.

Some of the organizations that you may either have heard about or may even be a member of will be involved in these elections or negotiations. Each of the three religious streams has a Zionist group. We, of course have MERCAZ, while URJ has ARZA and OU has Mizrahi.

Delegates are determined through voting in the USA, and the total number of votes in the 2015 election was 56,737, of which MERCAZ garnered just 9890. Had each of our FJMC members joined MERCAZ and voted, we would have more than doubled our number of delegates from the USA.

In Canada, with the third largest Jewish population after Israel and the USA, we have a total of 19 mandates, of which, through negotiations based on 2005 numbers, netted us just 3 delegates.

As president of MERCAZ Canada, I have informed the Canadian Zionist Federation that we must have elections. We, Conservative/Masorti Jews, make up more than 60% of the self-declared Jewish population in our country, yet have less than 15% representation at the world body.  In order to increase our membership, a number of countries were invited to send representatives to a special conference in Jerusalem, September 9 to 11, sponsored by Masorti-Olami.

As Canadian president, I was able to ask two other board members to join me at the conference along with myself, and I asked Charles Wrock and Kyla Hershoran to come. Charles and Kyla were going to be on their honeymoon in Europe just before the conference (MAZAL TOV!) and we were able to extend that trip to Jerusalem. Other countries at the conference included Argentina, Germany, Mexico, Ukraine and the UK.

We spent the three days working on membership techniques with professionals in the field and getting to know our counterparts in the other countries. We all looked forward to the next few months and began planning our membership campaigns.

Masorti-Olami brought Israeli experts in to talk about all aspects of election and recruitment strategy, and each of the national representations made presentations to the group about their own challenges and character.

Being in Jerusalem was wonderful, and we walked the city and enjoyed the nightlife over the course of the few days we were there. If you have not been in a while, the city has retained its charm, while becoming more a “big city” in a Tel Avivian manner. There is now nightlife in Jerusalem! The Machene Yehuda market no longer shuts down at 6:00 pm; restaurants and some stores are open well past midnight. On our last night at the conference, we had a “restaurant crawl” which included Georgian, Mexican, Israeli, Vegan, and others, including a number of choices of food and liquor that you won’t find anywhere else. 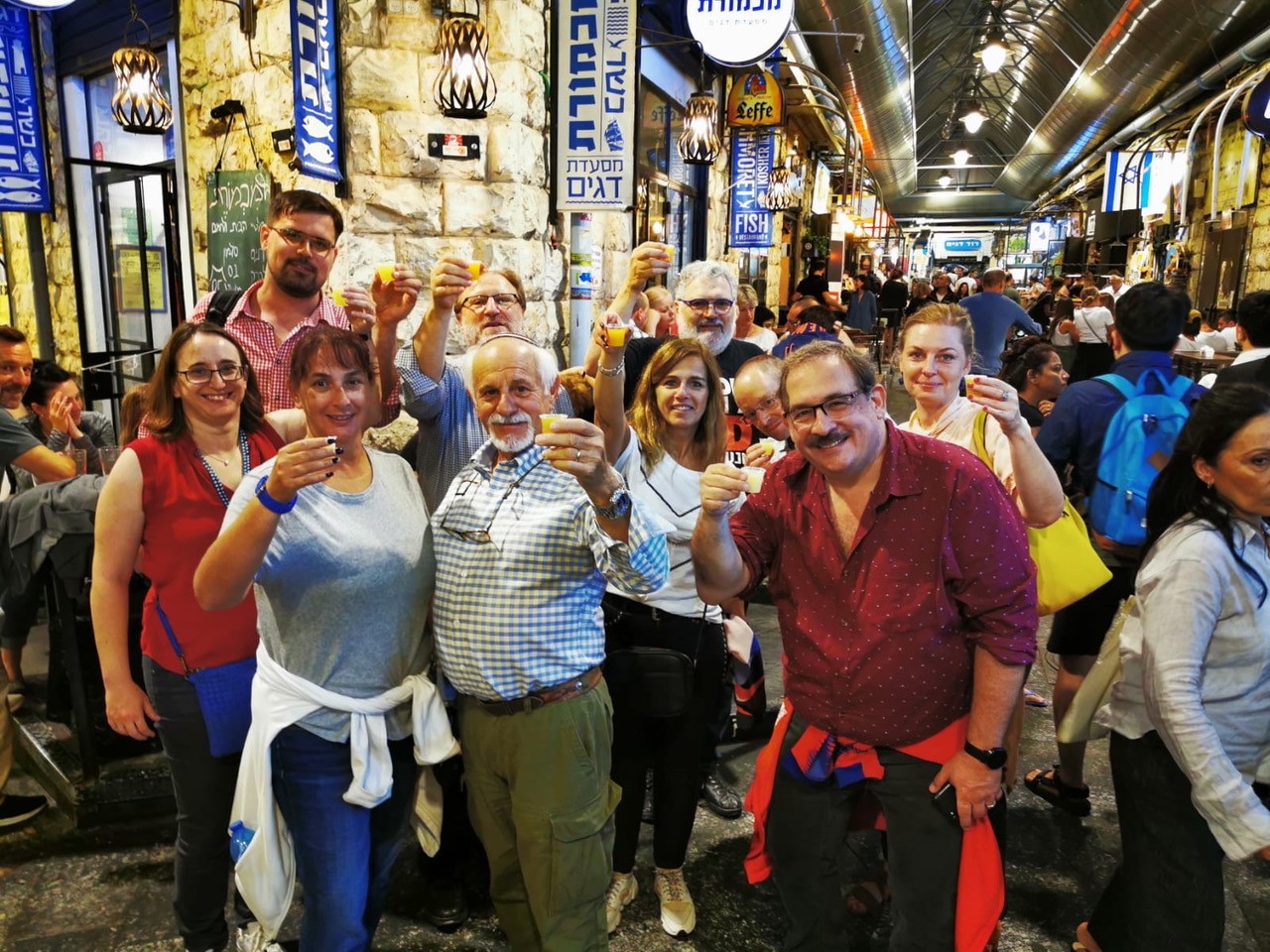 This last part is notable, as the representative from Germany, who is also the Executive Director of the Frankel Rabbinic School, Dr Sandra Anusiewicz-Baer, the Ukrainian representative, Yuri Radchenko, and I decided to uphold the national honour of Germany, Ukraine and Canada and made sure to sample all of the choices of spirits in order to be able to fully report to our constituents the highlights of the evening. As I can recall now, all were very good and international relations among our Masorti national groups had never been at a higher level! Next time you are in Jerusalem, visit the market in the evening and explore the area around it. A lot of work has gone into redevelopment in the past few years and the area is really changing for the better.

Getting back to the conference, presentations were at a level I have never seen before, with the top Israeli election professionals joining us to talk about encouraging people to vote. Bear in mind that the 2nd Israeli Knesset elections of 2019 would take place the next week, so kol hakovod to Rabbi Maricio Balter and Nilli Glick, our staff in Jerusalem, doing an amazing job of finding top notch talent for us.

On Tuesday afternoon we had a conference call with Laurie Moskowitz, who will be heading the membership and election campaign for MERCAZ-USA. Laurie has been working on a number of interesting strategies to increase membership, one of which you will probably see shortly, the ability to join MERCAZ by texting your name to a number. We think this will be a game changer and will be available on both sides of the border.

The event ended on Wednesday morning, September 11, with a presentation from the WZO itself. They are hopeful that we can increase our numbers and be better represented in the Zionist world. All it takes is a choice to join and have your voice heard.

In 2015 the following groups made up the 145 mandates from the USA: