My friend and brother Irwin Harris told me his story a few months ago. Besides being an officer of Tree of Life - Or L'Simcha Congregation and Past-President of their Men’s Club, Irwin is Past-President of the FJMC Tri-State Region and their current Ma’asim Tovim – doer of good deeds – Honoree. Irwin told me his story by phone, while walking on the sidewalks of NYC to visit his daughter for Shabbat.  Irwin was careful to portray his story accurately.

On October 27, 2018, with three congregations present in the TOL building [close up space] celebrating Shabbat morning services, the Pittsburgh synagogue shooting took place.  Eleven people were killed and seven (including the anti-Semitic perpetrator) were injured. It was the deadliest attack on the Jewish community in the United States.

Irwin suggests that the response by The Jewish Federation of Greater Pittsburgh was different than most. They “broke the playbook.” Yes, health care experts came into Pittsburgh from around the country. That was helpful. Then, theFederation donated $500,000 to the Pittsburgh Police Department.  Pittsburgh police officers came into the building and neutralized the assailant. Four police officers were injured. Three of them were shot in the course of their life-saving actions. The police response was whole-heartedly appreciated and visibly observed. 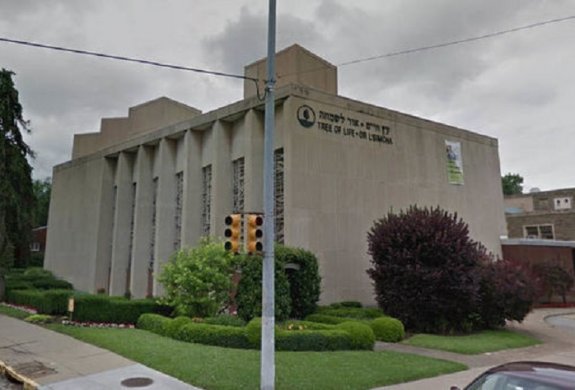 Irwin says for that for years the three shuls have shared one morning  minyan. He reflects,

“… maybe it’s God’s way to prepare us for what happened. Nothing has been the same since October 27th.”

How can Men’s Club’s respond?

Show strength – like the Pittsburgh community, live your life “Stronger Than Hate.” Teach and engage everyone in your community.  Be strong. Be vigilant. Always remember where we’ve been.

How to do that? One response is the FJMC Yellow Candles program; light a yellow yarzheit candle. The flame is a remembrance that may be shared with your family and the community.  For further remembrance, encourage everyone to light a Yellow Candle on Yom Hashoah, April 20, 2020.

​Recite a meditation. May their memory be for a blessing ….